Well this has been an interesting week but more on that in a bit.

Our last post had us in Cabo San Lucas. After a week split between anchoring in the bay and tied at the dock it’s a toss up as to which is best. They both have their pluses and minuses. Anchoring in the bay provides the breeze, the clear water and the sunsets, these are the pluses. All the traffic from the resort boats, the occasional rolly night and having to dinghy into town are the minuses. Oh yeah and one night they decided to have a massive, fireworks display at 12:30 am. We awoke to this explosion and blast of light through the windows of the boat. After discovering that neither our boat nor the boat next to us had blown up, once the heart started beating normally again, it was kind of cool to watch the fireworks from the deck of the boat.

Staying in the marina on the other hand, gives you easy access to everything, secured mooring with no worrying about anchors dragging – the pluses. It is an expensive marina, there was no breeze and we were close to the fuel dock, so every morning the fishing fleet would fuel up starting at 5:30 am -the minuses.

After a week though, it was time to move on. We knew better weather was headed our way but decided to leave a day before. We should have waited. While not unsafe, we had an uncomfortable ride into the winds and waves as we headed for Los Frailes. We didn’t make it. We bailed out at San Jose Del Cabo and spent 2 days at anchor in the harbour waiting on the good weather to finally show up. While here we met up with several other boats from the HA HA that made the same choice. We all toured the town, checked out the artist’s market in the city square (Centro) and had dinner at a small authentic Mexican restaurant where we enjoyed a very good meal.
While we were in San Jose Del Cabo we had some Wi Fi and a windows update automatically downloaded. More on that later.

A short, day sail from San Jose finally gets us to Los Frailes. A large bay with crystal clear water. We anchored in 17 feet of water and it’s the first time  I have been able to look over the bow and see the anchor chain lying along the sea bed and follow it to the anchor buried in the sand. The next morning, we were on our way to Bahia Los Muertos. It translates to “the Bay of the Dead” but its much nicer than the name implies.

Los Muertos has a huge beach with a resort at one end, they serve up a nice cold margarita. The bay has a new name amongst the real estate developers ”the Bay of Dreams”. There are plans in the works for a resort around a new golf course. We could only spend one day in Los Muertos but will be stopping in again before we head across the Sea to Mazatlán. The warm water here made it the ideal spot to do the cruisers equivalent of mowing the lawn and we scrubbed the waterline of the boat to remove the sea weed growing there. This bay is also a prime example of why you have to pay attention to the less than reliable charts for Mexico. According to my electronic charts we and all the other boats anchored around us are on dry land!

We are up early the next morning to start the long day sail us to La Paz. The cruiser’s head quarters for the Sea of Cortez. We are planning on staying here for a week to take care of a few small boat chores, but the computer became the all consuming fix. 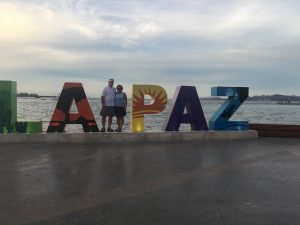 You see when the update was downloaded, it apparently fixed an issue I wasn’t even aware I had and at the same time completely wiped out all of my WiFi and blue tooth ability to connect. No more internet, email, weather downloads, at all. Nothing! We have become very used to being able to pull up weather charts and GRIB files to get a picture of upcoming conditions. Not to mention email communication with friends, family and service suppliers. Oh yeah and the bank account too.

It’s taken 3 different people to have a look at the computer before it was decided that the fix was to wipe the machine and reinstall windows. It fixed the issue but now I must reinstall all the various different programs we use. I’m not a computer expert and I don’t understand why; if a program is on the computer why can’t it stay on the computer or be backed up in its entirety? So, when we have issues like this it doesn’t become a 2-day project to reinstall the programs and data. To me it’s the equivalent of taking your car in for an oil change and having to reinstall the stereo, and seats and then put the tires back on before you can use it again.

We were here for the Nov 20th Revolution Day celebration. A national holiday and a reason for a large (2 hour long) parade along the Malecon. It appeared as though, every school and organization had representation. We were hot standing and watching. I can’t imagine how hot some of the participants would have been marching and dancing in their costumes. We have walked and explored the Malecon, Centro, Mercado and may other areas. 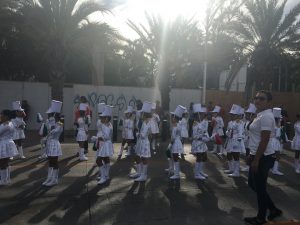 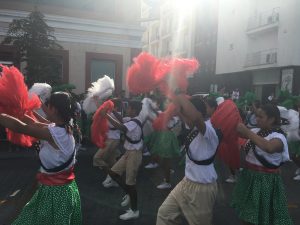 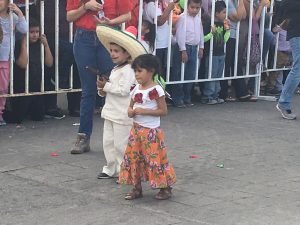 If the weather looks good a couple of days from now we will likely be headed up to some of the Islands and bays north of here before we head across the Sea of Cortez for Mazatlán.

We started the Baja Ha Ha rally on October 29 at 11:00 with a parade and sail past of the committee boat which had the dignitaries and press on board. It was similar to rush hour traffic if you can imagine 149 boats coming from several different marinas within the San Diego area, all trying to organize ourselves into a line 3 or 4 boats wide, close to each other without touching and trying to go about the same speed. We finally had a good parade set up and then the Navy sends a large ship in bound right through the centre of the channel. So much for our good-looking parade.

As we’ve come to expect, but quite contrary to most of the Baja Ha Ha rallies, there were very light winds for the first few days. Most of the fleet motored the entire way to the first stop at Bahai Tortugus, also known as Turtle Bay.

Fuel is available here. You have two options. Option 1, load your jerry cans into your dinghy, run to the beach, lug them 5 blocks to the gas station, fill them and then lug the now heavy jerry cans back to your dinghy and back to the boat. Option 2 take your chances with the sketchy fuel pier where you don’t tie up but anchor off and back up close to the pier and they send the fuel hose out to the boat.

We all anchored in the bay and then went ashore. The beach is amazing. A walking tour of the town, all 10 blocks of it doesn’t take too long so everyone heads in search of food and drink. The three or four restaurants / bars go absolutely crazy trying to keep up with the demand.

The Ha Ha tradition is a friendly baseball game between the residents and the cruisers. It’s a fundraiser for the town and afterwards all the baseball equipment the cruisers brought is donated to the kids in the town. A great time was had by all.

After a two day stop we are off again for a 48-hour sail to Bahia Santa Maria. Again, very light winds and lots of motoring sailing.  On the way down, one of the boats in our group sailed into a large, poorly marked drift net.  Of course, this happens at 2 in the morning. The fisherman cut most of the net away and then took off but still left a large chunk caught on the keel, prop, and rudder of the sailboat. We offered to tow them the 30 miles or so to the bay, so they could dive the boat and remove the remainder in the daylight and calm waters of the bay. There was no further damage and once the net was removed they were good to go.

Bahia Santa Maria is a large bay with a beautiful beach that goes on for miles. It is sparsely populated with just a few fishermen and their families that maintain homes here. For the Ha HA group these families all get together and prepare a meal of fish, rice and beans that they then sell to us cruisers. $15 per plate and 2 beer for 5 bucks. The dinner price might be a bit high for what you get but these folks probably make more in our 1-day visit than they do the rest of the year, so you think of it as charity rather than business. The really cool thing that the Ha Ha organizers do is to have a band brought out to the bay to play for us while we have our meal. Eating, drinking, dancing and socializing on a remote and gorgeous Mexican beach is a very surreal experience.

The third and final leg of the rally takes us to Cabo San Lucas. Finally, some wind. We had one of best sailing days ever. A sunny sky and warm winds from behind us allowed us to raise our spinnaker and run this way for 12 solid hours. We could have carried on all night like this, and some boats did, but with just the two of us on board we took the spinnaker down at dark. Safety first!

We arrived in Cabo San Lucas at 14:00 (2 PM) on November 8th. There is a sport fishing tournament on all weekend and with our 149-boat fleet showing up there is no room available at the marina so a whole bunch of us are anchored along Cabo’s beach. The tourists in the hotels are looking out over the water at us we and we are looking out of the water at them. We had a “I cheated death again” wind up party at the Squid Roe bar in town the other night and a beach party yesterday afternoon. Tonight, is the awards ceremony / party and then over the next few days we will all be departing to continue our trips on our own. The Baja Ha Ha has been a blast. Its been well organized and has made our first time cruising Mexico easy and fun.

We have exchanged information with many of the boats we have met and look forward to catching up with them at different ports along the way.