I can’t say enough about how cool the Anan Bear Observatory was. The ability to walk into their domain and remain there while the bears went about their business with little to no concern about us was an amazing experience but as it is with cruising we had to move on. It still deserves another picture. 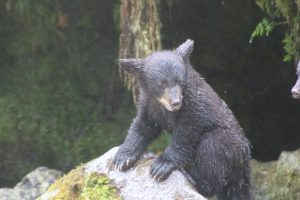 We went back to Wrangell so Cam could catch his flight back home and for us it was the signal to start heading back south. The calendar is conspiring against us. We want to get some final things done to the boat back in the Vancouver area and see friends and family before we head down the coast and on to Mexico, so we need to head back that way.

After we left Wrangell we did the run to Thorne Bay where we overnighted. Thorne Bay was once the second biggest logging camp in Alaska but is now just a small town on the bay. This evolution, it turns out, is going to be the theme of the week.

From there, we bypassed Ketchikan and carried on to Foggy Bay where we stayed the night before heading back across Dixon Entrance to Prince Rupert.  An “easy” button for this crossing even if the forecast was for winds from the North West, which would have been ideal for our direction, and instead they were from the South East. After arriving at Prince Rupert we cleared customs back into Canada, picked up some groceries and spent the night before we carried on.

Two of the other locations we have visited since our entry back into BC were Butedale and Ocean Falls.  Butedale was once a large fish cannery operation and is now basically just ruins that are slowly being taken down either by man or by nature.

Ocean Falls was once a thriving lumber mill with up to 5000 people living and working there. In 1973 the company shut down the operation and all but a few of hardy residents left with it. There are currently about 25 full time residents. Most of the buildings have been knocked down, fallen on their own or are being reclaimed by nature but many remain as if in a time capsule. Apparently, they were even a few championship swimmers that came from the Olympic size pool that was there. It has since been filled in.

It was eerie, spooky, a bit cool and a bit sad all at the same time to walk down a street and look into homes with lamps and appliances, faded and tattered wall paper and even some personal effects from past residents still in place. While we were walking through the site I was half expecting someone to cue the horror movie music. 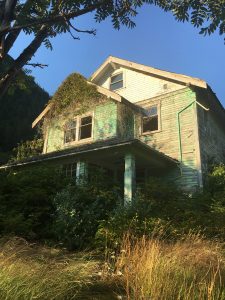 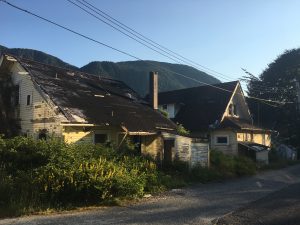 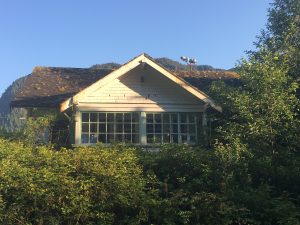 For Sale ad would read “needs some TLC”.

I had mentioned in an earlier post about how hard it was to get whales to perform on cue. I was able to meet with their agent and we had two occasions where they were surfacing close enough we could get some pictures. We also had some dolphins come and play in the bows. Always a thrill. If I ever get tired of it, it will be time to get off the boat. 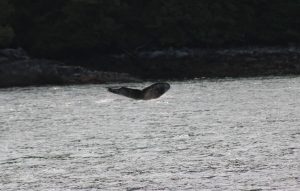 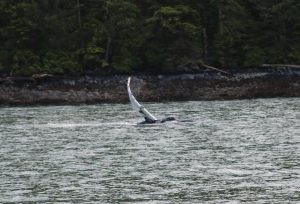 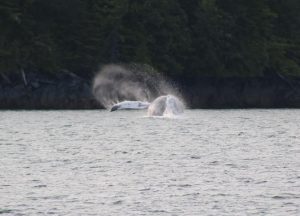 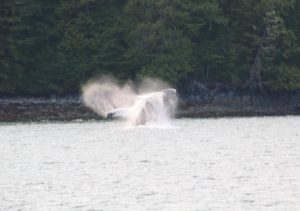 Time For a Left Turn