We left Ketchikan with the intent of sailing to points on Baranof Island and then on to Sitka. We enjoyed our first day out as we motored up Clarence Strait to a little bay called Meyers Chuck. The entrance is a little tricky but once inside it’s a neat little spot. We tied up to the State dock there for the ridiculously cheap price of $8.13 per night and it was a great structure not some beat up or run-down wharf. We had heard that moorage in Alaska was very reasonable. The most prominent building on the waterfront is the post office. Guide book states ” the post office is open Tuesdays from 11 – 2 and Wednesdays for 1 hour after the mail plane arrives.” 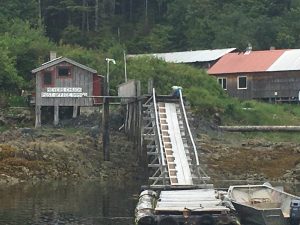 The next morning it was off to Exchange Cove on Prince of Wales Island where we were the only boat in a big bay. This was a good point to set ourselves up for our upcoming transit of Wrangell Narrows.

Wrangell Narrows is a 22-mile passage between Mitkof and Kupreanof Islands. It is a short cut to the northern portion of South East Alaska and is used by all types of marine traffic. Everything from the small cruise ships, large tug boats and tows to pleasure craft like ours. In places its less than 30 feet deep and some of the dredged areas are less than 300 feet wide. There are more than 60 navigational markers you use to make sure you are in the right place. Just to make things more challenging, the tides sweep around the island and come into and out of the channel from both ends and meet in the middle and they can create currents that run up to 4 knots.
Local knowledge says, arrive approximately 2 hours before high water slack and you will get the current with you to the midway point, then the tide will change, and you will have the ebb current with you for the last half. We did, and with Barb keeping an eye on the charts on the iPad and me watching the charts on our plotter and both of us watching the water ahead for the markers and oncoming traffic and behind for faster moving traffic overtaking us we made it without any extraordinary excitement.

Just before we entered the passage there was a tug and barge lining up. I radioed the Skipper and asked if his preference was for us in front or behind him in the channel. He replied behind and am I glad I had this conversation. The tug and barge was 395 feet long and 100 feet wide and he shot down the middle of that channel at almost twice our speed. I would not have wanted that chasing me through there!

The north end of the channel ends at Petersburg, also known as little Norway. A quaint town built on the fishing industry with hundreds of fishing vessels of all types based out of here and the fish processors on shore. We spent an extra day just walking the town and seeing what was there.

We were preparing to continue towards Sitka but when I checked the saildrive oils prior to departure I discovered water mixed with the oil in one. This is disheartening. While the repair itself is not complicated it does require that the boat be lifted out of the water. Petersburg does not have the ability to do that. I called Sitka and they can not haul us either. We need to turn around head back down the narrows and over to Wrangell. They have a machine large enough to lift our boat. Its not the length we have issue with but rather the width (beam) at 22 feet we need a lift designed for much larger mono hull boats of the same beam.
The run back down the narrows is uneventful with no large commercial traffic encountered and we arrive in Wrangell.

We have contacted a repair mechanic and have ordered parts so now we sit and wait. Anyone who knows me will tell you I don’t do “wait” very well but I have no choice. When you are “out here” that’s just the way it is. Overnight shipping is 3 days.
The fishing fleet is at the start of their season, so the mechanics are understandably, focused on their “bread and butter” customers and the forth of July is just around the corner so everyone is gearing up for and shutting down for the holiday. It could take as long as 2 weeks for us to get the repair done.
The frustrating part of this is that part of our pre-departure work done to the boat was to have these seals replaced. They are normally good for at least a thousand hours of use. This one has less than 300 and has failed prematurely.
On the plus side Wrangell is know as the Friendliest City in SE Alaska and everyone says that Wrangell is the place to be for the 4th of July. So far we can attest to the friendly part. Barb and I were at the post office looking at our map and we had three different people ask if we needed help and offering to drive us back to the marina if we wanted. The 4th of July is a big deal here. At one of the shops we were given the 2-page list of events starting on June 30 and carrying on right till the 4th. Even if the boat get fixed before, it may be worth hanging out just to see what the festivities are like. We’ll let you know.

Time For a Left Turn

One thought on “Frustration and Patience”