Some of you may have noticed the pictures of Ketchikan on our Facebook page, so you know we made it not only back across Hecate Strait but also across Dixon Entrance and are now in Alaska.

Wow! Now it feels like we have accomplished something. We’ve completed the major crossings, Johnstone and Hecate Straits, Dixon Entrance and we are officially in a foreign country.

Crossing back from Haida Gwaii to Prince Rupert was “interesting”. We were watching the weather. (Have I mentioned how much time we spend watching, reading or listening to weather forecasts.) We hear that this Saturday’s weather calls for winds of up to 25 knots and waves up to 2 meters, after that its winds up to 35 and waves up to 3 meters for the next 4 days. If we leave early in the morning we might be able to get half way across before the afternoon winds build. That way we will only have half a day in uncomfortable conditions. If we don’t leave we could be here for another week.

Who ever invented the saying “sail off into the sunset” was a liar. We spend way more time sailing into the sunrise. As Robin Williams said in the movie Good Morning Vietnam, “Do you know why 4 am is called Oh 400? Its Oh my gawd that’s early”. We decided to make a break for it. The sunrise is beautiful, and the weather is as predicted so we have a rather lumpy but great sail back to the Mainland. Setting the sails once out of Skidegate Channel and sailing 60 miles across Hecate Strait. No easy button on this one but we got across without incident. We overnighted in the Spicer Island group then headed to Prince Rupert the next morning.

We spent a couple days in “Rupert” before making the Dixon Entrance crossing. This one qualified for the easy button with only light winds and calm seas. After an overnight in Foggy Bay, we’re in Ketchikan Alaska. We made it!

Preparing for these crossings is both physical and mental. The physical is prepping the boat. Checking oils and other fluids, tying down and stowing everything and just making the boat ready for the trip. The mental part is often tougher to deal with as the brain starts with all the “what if” questions. Just before you set off its most like what people would call “the butterflies in your stomach”. A nervous anticipation of what you are about to do. We cast off when we are confident in the readiness of the boat and ourselves. 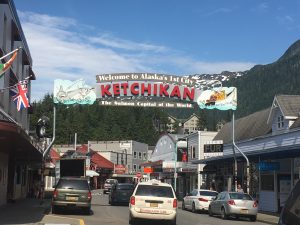 Ketchikan was interesting after being in the secluded places we have been. When we arrived in Ketchikan there were 2 cruise ships in town the next day there were 5, so we basically toured Ketchikan with 15,000 of our new friends. 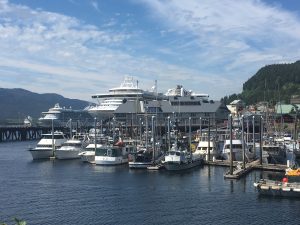 I don’t think I’ve seen a total of 150 people in the last 3 months. That seems so odd that a guy coming from a city of a million and a half people only 3 months ago would find this so busy but I did.

Maybe it was the concentration of people in a small space or the frantic pace in which they were all moving. They only had 5 hours to see the sights. We had the luxury of time and we were able to slow our pace so we went to the Totem Museum, the Forest Service’s Discovery Centre Museum, The Tongass Historical Museum, walked the “tourist” area by the cruise ship terminals. We checked out Creek Street, the original Ketchikan with a very colourful past, most of which involved red lights.

We sat on a park bench eating ice cream and watching the cruise ship passengers line up to get back on the boats. We were actually quite surprised at how little time they had in port before they were off again.

When we departed Ketchikan the next day, we saw 2 new boats in the harbour and we passed 4 more coming in as we sailed out. We are about to work our way north to Petersburg then west to Sitka. TTYWWHWFN (talk to you when we have wifi next).

All Fun and Games Until Its Not

2 thoughts on “Alaska at Last”