Well that was fun. 6 weeks on the hard at Canoe Cove with Raven and Blackline doing great work as expected. Here is a list of what we had done:

I’m happy with the way the arch and solar turned out. Its darn near big enough to be a helipad but I don’t think it looks out of place. We should not be wanting for recharging capacity. 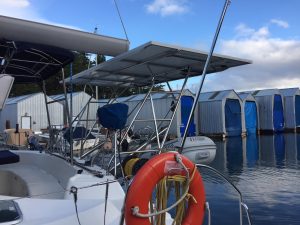 Most of the items on the list were completed but some have been moved on to the new list of remaining items for me to do. Remember a couple posts ago I mentioned making lists. Well I’ve done so many damn lists I now need a list of my lists.

It can actually get almost overwhelming if you look at it all at once. And it can also be frustrating as hell. It seems you can never actually work a single project through to completion without some kind of delay. Trade not available,  part not available, tools at home when you are at the boat or at the boat when you are home. You just have to keep reminding yourself one thing at a time. Work a project till you can’t get any further then move on to the next one.  That’s just part of the program.  So now I have a list of partly completed projects.

The other BIG news…..  the house is SOLD. No turning back now. Looks like its payback on Megan as we will be bumming a room off of her for a month. House sale completes the beginning of March and I’m still working until the end of the March. Her place is closer to the office than the boat is so its weekdays at her place and weekends on the boat for the month of March.